Ok, so we have a 32-bit Windows PE executable. Next I loaded it into IDA Pro for further analysis. 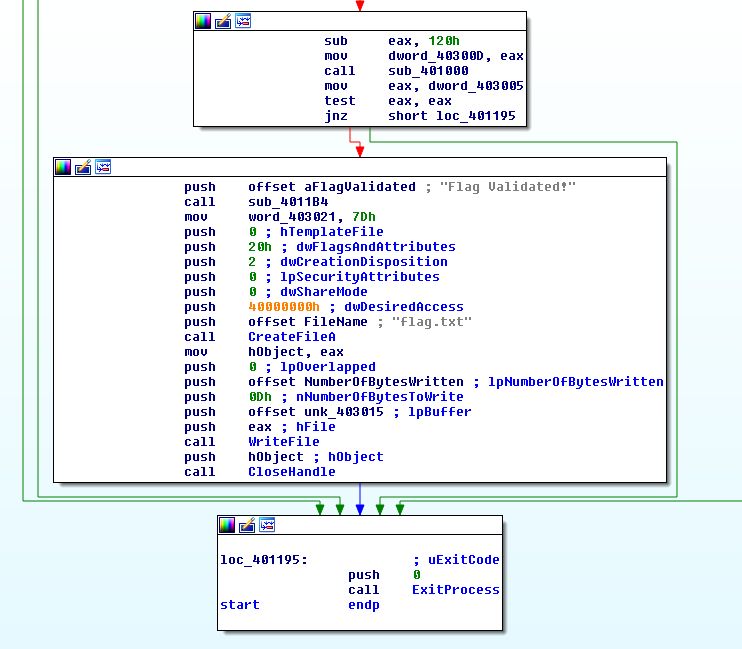 The first thing I observed was that towards the end of start, or more preciselly @ 0x00401145, there is a block of code that gets executed when we enter a correct value. In all other cases, the program jumps straight to loc_401195, which executes call ExitProcess.

So now I went back towards the top of start to try and figure out how we can avoid the execution path to loc_401195.

So the program pushes the string “Validate Flag:” to the stack and executes call sub_401184. This function will likely print that string to the console. Next I observed that the program pushes two variables onto the stack, nNumberOfBytesToRead and lpBuffer. Then it executes call sub_4011EC folowed by a cmp eax, 6. I could reasonably guess that this function would read 8 bytes from the console, and return the number of bytes that it read. The cmp eax, 6 would then be used to verify that 6 bytes were entered at the console. I used the Win32 debugger to verify this suspicion. 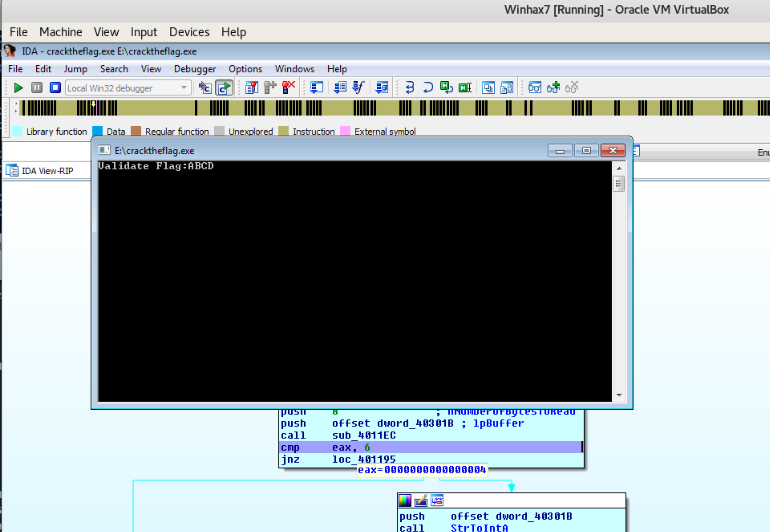 Yup, I entered 4 bytes and eax was set to 4. So now we can note down our first constraint for the password, it must be 6 characters long. 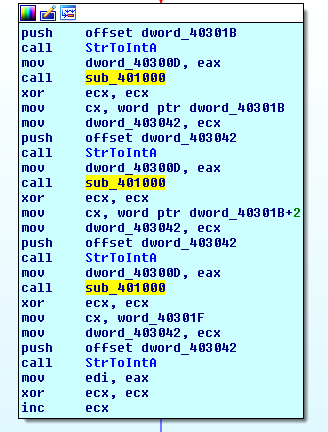 Next I noticed that StrToIntA gets called 4 times. Additionally, the same method gets executed 3 times, sub_40100. But since this method didn’t appear to be affecting the control flow yet, I decided to ignore it for now. However, I was curious as to why StrToIntA was getting executed so many times, so using the debugger, I checked the stack each time before it was executed to see what parameters the program was using.

The test string I used was ‘123456’. Below is some Python pseudocode to better illustrate what is happening. 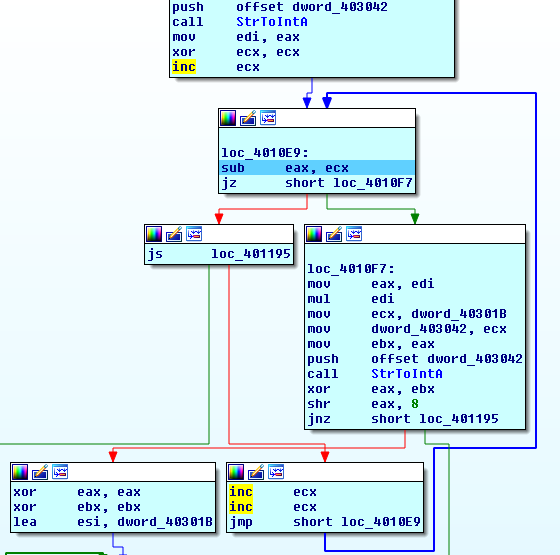 Next, I observed the code immediately following the StrToIntA calls. It looks like we want to avoid the jump that could occur as a result of ‘js loc_401195’. I didn’t immediately recognize the js instruction, so I had to quickly search online for more information. Apparently, this jump occurs when the SF flag is set to 1. And the SF flag will be set to 1 if a previous arithmetic operation results in a negative value. Or more specifically, if ‘sub eax, ecx’ results in eax becoming negative. The result from the previous StrToIntA gets stored in eax, so this is a value we can control using the last 2 digits of the string we enter. When this loop is first entered, we know the value of ecx will be 1, because of the 2 previous operations, xor ecx, ecx (which sets ecx to 0), and inc ecx which increments ecx by 1. If eax is 0, the loop is exited and the program continues executing. After the check for eax being negative, ecx is increased by 2, and the loop continues.

To confirm my analysis, I decided to implement this code in Python, and then bruteforce numbers from 0-99 to find which values will result in program execution continuing to loc_4010F7.

The result of executing this script is…

Next, I again ran the application with my debugger attached and used the string, ‘123481’ to verify that my script was correct. I indeed exited the loop without jumping to loc_401195.

Then using the debugger, I observed that StrToIntA is once again being called, but this time on the first 4 characters entered by the user. The result of this call, is stored in eax and then an xor is perfomed with ebx, the result being stored in eax. Finally, shr eax, 8 is executed. For those unaware, ‘shr’ stands for Shift Right. So it is shifting the value of eax, right by 8 bits and then storing the result in eax. This must result in eax = 0 or otherwise the program will end.

The output for this script is now…

And now we will once again update our list of constraints: 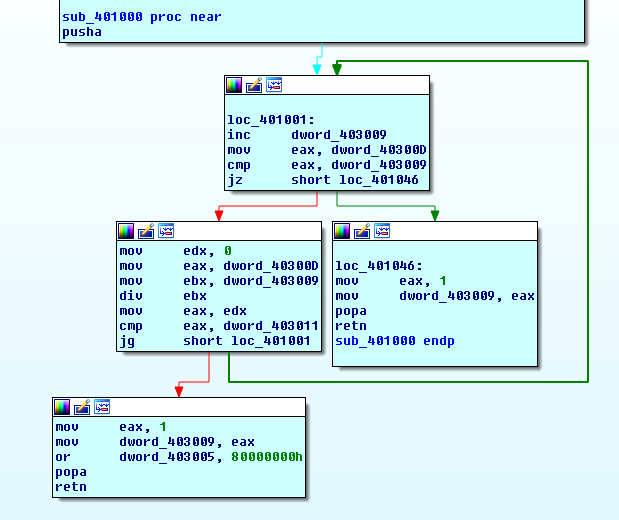 After stepping through this function quite a few times, I discovered that it starts by dividing the number stored at dword_40300D by 2. If the remainder of this division is 0, the function exits and sets dword_403005 to 80000000h. Then the denominator is then increased by 1 and then calculated for a remainder once again. This loop continues until the denominator is equal to the numerator. In otherwords, this function is testing for prime numbers! Rather than attempt to implement the assembly in Python, I googled for one already implemented online and found the following on StackOverflow.

Lets go back to that previous block of code that executed the prime function a few times, we’ll use the Python psuedocode for readability:

Now that we know sub_401000() checks if the number is prime, we can update our list of constraints:

I still had not checked what values were being passed to the last call to the prime number function, but I decided to implement what I have so far in Python to see if the # of possible solutions is small enough to manually brute force.

First I hacked up a function to brute force the values that would satisfy the prime number requirements.

And finally, to tie everything together I have the following code:

Executing the final script results in the following output:

Here you can find the complete implementation for cracktheflag.py